Code-switching and Fluidity as a Strategy for Survival

Emma, Belinda and Pinkerton in a scene from Mercy Street.

Code-switching and Fluidity as a Strategy for Survival

In Episode 5 of Mercy Street, all three African American characters’ lives are in a state of flux. Belinda is trying to protect the Greens, despite not knowing what she is protecting them from. Charlotte does not know the fate of her school. Sam does not know where he stands with Hale and the consequences of the autopsy report.

This episode provides an important insight—that the black characters interact differently with each other than they would with the Mansion House Hospital staff. This is one of the strategies African Americans employ to survive. Collectively, these coping mechanisms belong to a phenomenon known as fluidity. According to social activist and writer bell hooks:

Fluidity means that our black identities are constantly changing as we respond to circumstances in our families and communities of origin, and as we interact with a wider world.1

Two of the strategies examined here are extreme deference and code-switching.

Belinda displays extreme deference by keeping her own counsel until it becomes unbearable. While enslaved, Belinda’s valued status among the Greens is due to her lifelong relationship with Mrs. Green’s family. In fact, she sees herself as part of the family.

I love these children, sir, like they’s my own. And I couldn’t bear bringin’ no trouble on this family.

With the war, everything changes. The Greens show some loyalty by keeping her on as an employee, but Belinda feels that the Greens resent her for wanting freedom, as if what they have provided all these years is not good enough. They see her current situation as better than that of the contrabands,’ but that only relates to physical comfort. To many African Americans, freedom is worth more than that.

When Mr. Green wrongly accuses her of stealing, Belinda sees this as an inexcusable betrayal.

I only ever tried to keep you people out of trouble. But y’all too good at bringin’ it on yourselves.

It is now clear that something must change for Belinda. 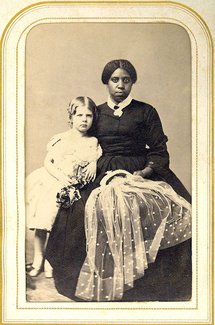 Nancy Davis. Courtesy: Hampton National Historic Site, National Park Service7 For two real-life examples of “loyal servants,” we can look to the stories of Nancy Davis at the Hampton National Historic Site in Towson, Maryland, and Selina Norris Gray at Arlington House in Arlington, Virginia.2 Nancy Davis (1833-1908) was a longtime enslaved house servant of the Ridgely family, owners of the Hampton estate. Out of hundreds of enslaved individuals there, she is the only one identified by name in a photograph.3 Nancy was manumitted (granted freedom) in 1858, but she stayed with the family as a paid servant until her death.4

Selina Gray was a well-known slave of the Lee family. She is credited with saving their heirlooms and antiques, at great personal risk, when the family fled Arlington House during the Civil War.5 Gray, who was freed in 1862, continued to live near Arlington House until her death. Both women showed incredible loyalty to the families that had enslaved them. Neither ventured far from where they lived. Their reasons for staying may never be fully understood.

The term arose in linguistics specifically to refer to mixing languages and speech patterns in conversation. But we're looking at code-switching a little more broadly: many of us subtly, reflexively change the way we express ourselves all the time. We're hop-scotching between different cultural and linguistic spaces and different parts of our own identities — sometimes within a single interaction.6 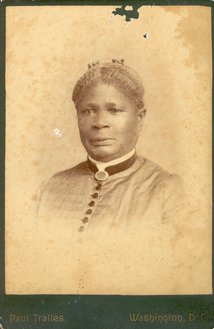 Selina Gray. Courtesy: Arlington House, The Robert E. Lee Memorial.8 For example, Charlotte’s interactions with Sam are more casual, with a growing intimacy, than her conversations with the Mansion House hospital staff. She feels comfortable talking about the contraband school and venting her frustrations. This is demonstrated by her word choice and her relaxed accent and phrasing. By contrast, in her professional life Charlotte is very careful about her speech and behavior. She is burdened as the representative of the contraband relief organization, of her race, and her gender. Because of this, she uses more standard English in these interactions. While not a traditional example of code-switching, this fits Denby’s more modern definition of code-switching in a cultural sense.

Sam’s relationship with Dr. Hale is fraught with power plays. Hale is friendly when he needs something, but if his own well-being or professional status is in jeopardy, he is willing to sacrifice Sam. When Hale asks Sam to take the blame for a falsified signature, Sam asks if he is supposed to “play the dumb Negro,” switching his speech pattern to a stereotypical slave dialect.

Will that explanation be sufficient, Dr. Hale?

The switch back to standard English is Sam’s way of showing his contempt for Hale’s request, and subtly stressing that Sam is at least his equal, if not superior, in medical knowledge.

By the end of Episode 5, Charlotte and Sam are hopeful for better days, but Belinda is frustrated. Her future is unsure, but she has enough wisdom to see that the world is changing for African Americans. Soon, families like the Greens will not hold all the power. Although weary, Belinda is resilient, and in her heart, she knows that with change comes renewed hope.

[2] Both Hampton National Historic Site and Arlington House are run by the U.S. National Park Service.

[4] Robert T. Chase and Elizabeth Comer, “On The Border Of Freedom And Slavery: The Hampton Plantation, The Northampton Ironworks, And The Transformation Of Labor, 1740-1948” (EAC/Archaeology, Inc., PMIS #17427  Historic Resource Study, January 2014).