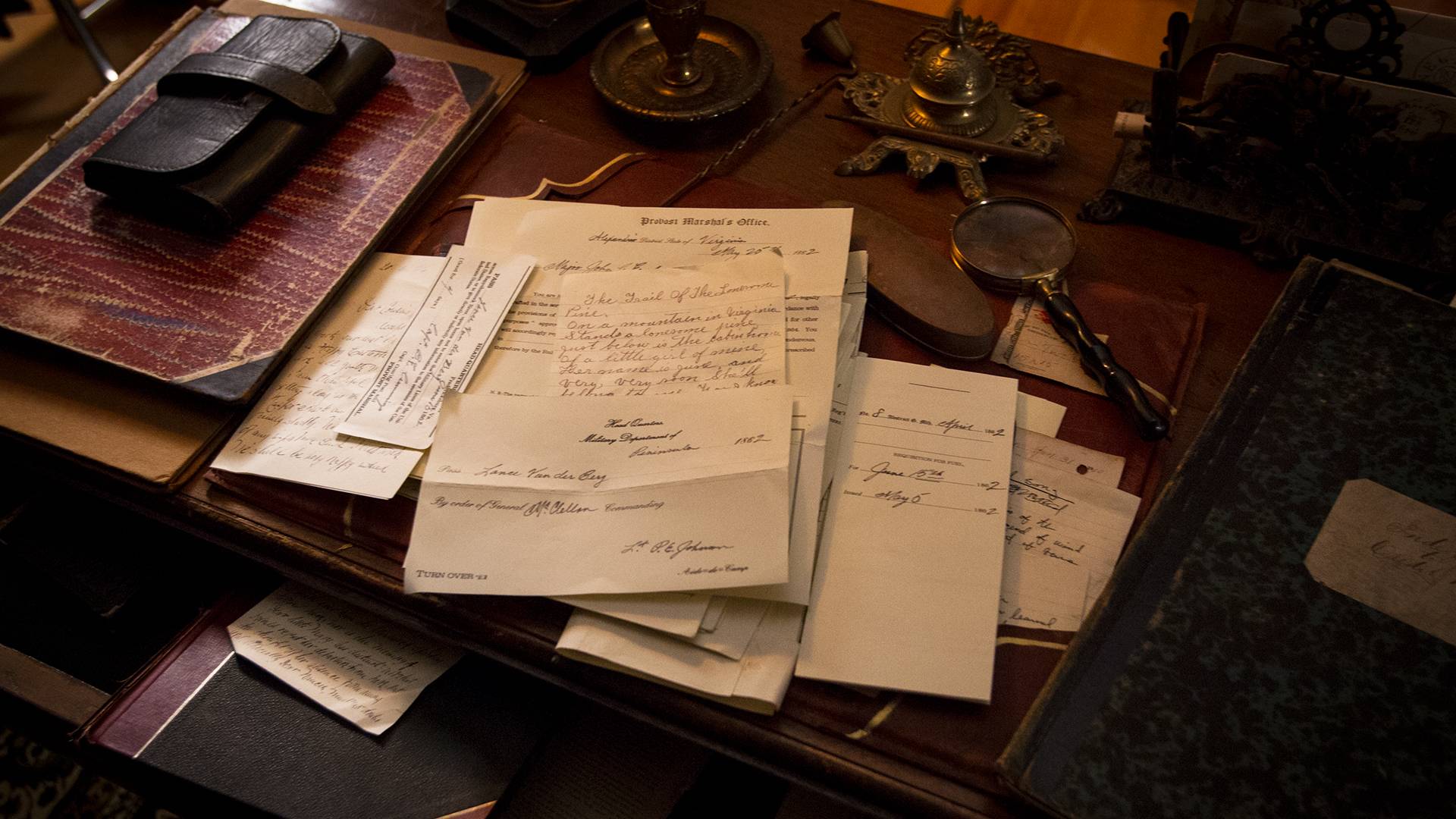 Correspondence and notes from the set of Mercy Street Season 2

In this blog post, Schultz discusses the cultural significance of letter writing in nineteenth-century America, especially during the Civil War.

It would be difficult to overstate the cultural significance of letter writing in nineteenth-century America, especially during the four years of the Civil War. In the age before screens and telecommunication wires (notwithstanding the emergence of telegraphy in the 1830s), the single most-valued instrument of distance communication was the letter—conveying materially the voice, the signature, the penmanship, and even the scent of the sender.  Letters were the most intimate of things: they bridged the impossibly long distances of the American continent with news that could not easily be gotten in any other way. During the war, the news that letters brought was invaluable to recipients. Letters from soldiers to family members and from medical staff to all parties constitute the mother lode of documents in U.S. libraries and archives holding Civil War collections. Letters were the primary mechanism by which family members learned of the health and movements of their kindred—and sometimes their deaths. In Matron Brannan we see an early example of how a mother might have received news of her son’s death. Noting that the return address is from her son Declan’s commanding officer, she carries it around all day in her pocket, unable to read its contents until she can persuade Nurse Hastings to read it for her. And she is so certain of its contents that when Miss Hastings fabricates the manner of her son’s death in order to spare her the additional agony, Matron Brannan asks for the letter straight, in all its undignified glory.

Letters expected and unexpected have punctuated the episodes of “Mercy Street,” entering Mansion House like unwelcome guests. In Season 1, Mary Phinney writes to the unfaithful wife of the dying private, Phillip Starks, trying to shield him from news that would wound his morale and hasten his demise. In Season 2, after the murder of the Union captain, Lance van der Berg, Alice Green forges a letter in the dead officer’s hand addressed to his mother—a ruse that backfires when Detective Pinkerton discovers that van der Berg’s mother has been deceased for years and a discovery that further incriminates the Green household.  In their pact to send the officious and tyrannical Major McBurney away from the hospital for good, Dr. Hale and Nurse Hastings also fabricate letters to hasten his departure.  The obsequious Hastings makes McBurney believe that he has missed an important meeting with the Union Surgeon General by tucking a letter she has drafted into the chief’s desk drawer.  When he finds the missive, mortified that he appears to have forgotten all about the meeting, he dictates an apology letter that Hale promptly intercepts and destroys.

In the first two seasons there have also been moments where the receipt of letters introduced newcomers, announced promotions, or eased anxieties. When Colonel Summers departs for his Washington City desk job in Season One, Dr. Foster learns, much to his surprise, that he has been appointed head of hospital before the more experienced Dr. Hale.  Charlotte Jenkins’ arrival to work with the contrabands in Season 2 comes via two letters of introduction: one written to Nurse Phinney, requesting cooperation, and a second that she hand-delivers to the new surgeon-in-charge, recommending her to work on the hospital grounds. Letters have also brought news of staff welfare: Despite Mary Phinney’s injunction to her Aunt Agnes that Dr. Foster not be made aware of the seriousness of her disease, the letter she writes to the hospital staff functions as an epistolary beacon: As Foster heads to Philadelphia with Samuel, who has just been admitted to medical school, he repairs to Boston and Mary’s bedside, where he becomes, in effect, the Letter Incarnate.

Civil War medical workers at all levels depended on the letter to create links with family at home—their own as well as those of their charges. Josiah Dexter “Deek” Cotton, Surgeon of the 92nd Ohio Infantry, wrote almost daily to his wife Ann of his regiment’s movements (“the people of Ohio can not have the least idea of the destruction a large army makes when marching though an enemies [sic] country”); his own health (“loose bowels”); and military escapades (“The rebels from the other side of the river shoot at our boys occasionally when they are bathing…. As a bullet would be apt to hurt a person especially when he was naked, we do not care about going oftener than necessary”).  Others wrote about the interracial demographics of regiments. Canadian physician Francis Wafer, trained in Kingston, Ontario, became Assistant Surgeon with the 108th New York Infantry in mid-1863 and confided to his brother, “Two Army Corps have joined us containing many negro troops. Though I have been much prejudiced against them, I must admit I am much pleased with their soldierly appearance & discipline. They also stand very high even in the estimation of the white troops for their gallant conduct under fire.” Twenty-six-year-old William Watson, a University of Pennsylvania-trained physician and surgeon of the 105th Pennsylvania Infantry wrote to the homefolks about errant colleagues: “Our missing Surgeons have all turned up…. It is said they were drunk almost the entire time, that they used the Stimulants sent over the River by the Medical Director for our sick and that they shamefully neglected to dress the wounds of our own men.” 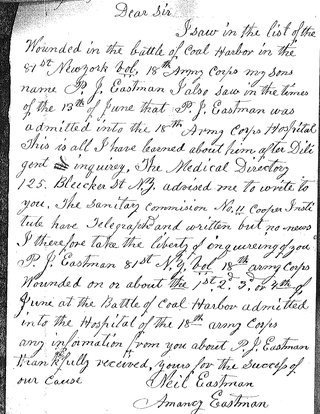 National Archives While surgeons used precious time to communicate with family members or to draft official letters to the medical departments of their respective sections, they left much of the writing home to soldiers’ kin to their female attendants. Indeed many of the women who were able to garner appointments as nurses—rather than lower-status ones as cooks and laundresses—won their positions precisely because they were able to demonstrate a high degree of literacy.  Mary Phinney von Olnhausen, the woman after whom our “Mercy Street” heroine is modeled, felt exploited in the letter-writing department: “I think, had I known this part of my duties,” she wrote, “I never would have enlisted.” Three days after the battle of Gettysburg, the tender-hearted Quaker nurse Cornelia Hancock, who had arrived to indescribable scenes of suffering, noted, “I would get on first rate if [the soldiers] would not ask me to write to their wives; that I cannot do without crying, which is not pleasant to either party.” But many other relief workers, like Maine’s Harriet Eaton, who spent her evenings drafting diary entries copied almost word-for-word from correspondence with her funders back in Portland, were more stoic and assiduous in getting out word to watchful waiters.

Nurses not only wrote home to update soldiers’ loved ones on their medical condition, but according to Marilyn Mayer Culpepper, they were “barraged” with letters from mothers and wives seeking news of fallen menfolk. In June 1863, Confederate nurse Mary Martha Smith Reid received a letter from the mother of a soldier reported killed. Hoping against hope that the report was false—indeed such news was occasionally in error—this inconsolable parent begged Reid to scour the Richmond hospitals for any sign of the missing boy. Neil Eastman wrote to the Union Surgeon General’s Office on behalf of his son, P.J., of the 81st New York Volunteers following the Battle of Cold Harbor in June 1864, and after checking the “Medical Directory”—a late-war register prepared and published by the U.S. Sanitary Commission, which identified the whereabouts of hospitalized men—and found out nothing more than his son’s location. Learning where a child or a spouse was under medical care did little to dispel anxiety when the promise of learning the details of the case seemed so remote.

Scores of women who had nurtured bonds of intimacy with men under their care continued to nurture those bonds when men returned to their units or went home.  Many write of having helped disabled soldiers and amputees—or their families—obtain honorable discharges and pensions, a task that flummoxed even the most adept student of institutional bureaucracy.  Harriet Foote Hawley, wife of an officer and future governor of Connecticut, regularly received letters from the wives and mothers of soldiers with whom she had corresponded concerning their men’s medical progress, letters that communicated their gratitude. Charles Hooper, an officer stationed at Jacksonville, Florida, wrote Hawley in April 1864, “I shall be most happy to hear from you if you think me a worthy object to bestow a few lines upon.” With more than fighting on his mind, Hooper, who had already sent his photo to Hawley, asked her to distribute it to “Miss Wood and Mrs. Wayland” as well, hoping to increase his circle of admirers.

Most telling of the bonds of affection that Civil War nurses established with patients were the letters sent to them long after the war.  Barbara Moore Simmons, a Confederate woman who nursed soldiers in her Demopolis, Alabama, home, received letters from men identifying themselves years later as “your soldiers.” The stalwart Mary Ann Bickerdyke was so beloved of the rank and file that soldiers corresponded with her for decades after the war, including one series of letters from N. B. Hood which continued at least until December 9, 1895 when he signed, “I remain as ever your boy.”

Letter: ​Anxious parents Neil and Amancy Eastman of New York wrote to the Surgeon General’s Office in search of Information about their son who had been hospitalized after the battle of Cold Harbor (they refer to it as “Coal” Harbor). Credit: National Archives