'Freedom of Matrimony': Celebrating Love in an Era of Emancipation

Scene from episode 6 of Mercy Street.

Anya Jabour, Ph.D., has been teaching and researching the history of women, families and children in the 19th-century South for more than 20 years. She is Regents Professor of History at the University of Montana, where she is affiliated with Women’s, Gender and Sexuality Studies and African-American Studies and has received several awards for teaching and research.

In this blog post, Jabour explains that for emancipated African Americans, wedding celebrations offered one of the first opportunities to enjoy freedom.​

'Freedom of matrimony': Celebrating Love in an Era of Emancipation

On the first anniversary of the Emancipation Proclamation, one black speaker proclaimed:

This is a day of gratitude for the freedom of matrimony. Formerly there was no security for domestic happiness. Our ladies were insulted and degraded with or without their consent. Our wives were sold and husbands bought, children were begotten and enslaved by their fathers, we therefore were polygamists by virtue of our condition. But now we can marry and raise our children and teach them to fear God ...

For newly emancipated African Americans, one way to lay claim to racial equality was to demand marital equality. Drawing on both historical scholarship and period accounts, Mercy Street celebrates love and emancipation in the closing scenes of the second season. 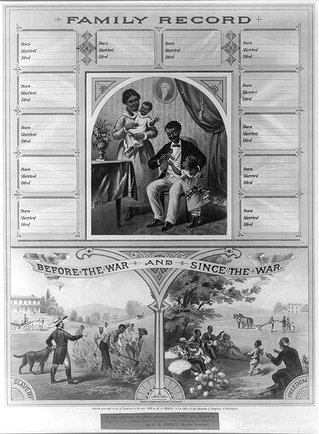 Library of Congress As Charlotte Jenkins explains to Emma Green, the possibility of separation was omnipresent for slave couples. “Instead of ‘till death do you part’ they say ‘till death or distance.’ It’s usually distance.” Scholarship on slavery supports this claim. Slaveholders’ decisions terminated nearly as many slave marriages as death.

Slaveholders interfered with slave relationships in a variety of ways. They could prohibit marriages outright, as in the case of Belinda and George. They also could arrange marriages, as was the situation for Saga on the Foster plantation. They could sexually assault slaves and shield themselves from discovery by selling their own offspring, as Ezra Foster did. Finally, as indicated by Charlotte Jenkins, slaveholders could separate couples against their will.

Slaveholders terminated slave unions in several ways. They frequently sold or “hired out” individual slaves without regard to their marital status. In situations in which husbands and wives lived with different owners, known as “abroad marriages,” a slaveholder’s decision to relocate also resulted in the separation of slave couples. Even in death, slaveholders often caused the breakup of relationships, when their estate—including their human property—was divided among heirs or sold at auction.

Although the majority of enslaved African Americans entered committed relationships and formed nuclear families, their marital and familial relationships were not recognized or protected by law. Thus, as one North Carolina judge expressed it in 1858:

The relation between slaves is essentially different from that of a man and wife joined in lawful wedlock ... [for] with slaves it may be dissolved at the pleasure of either party, or by the sale of one or both, depending on the caprice or necessity of the owner.”

Not surprisingly, then, former slaves regarded legal marriage as one of the chief benefits of emancipation. During the Civil War, contrabands sought out ordained pastors like Chaplain Hopkins to perform wedding ceremonies. Following the Civil War, freedmen also could call on the services of agents for the Freedmen’s Bureau, the federal government agency set up to facilitate the transition from slavery to freedom. 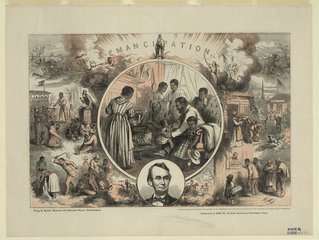 Library of Congress Although later generations revived the slave-era tradition of “jumping the broomstick,” in the Civil War era, African Americans valued conventional wedding ceremonies, complete with preachers, witnesses, and marriage certificates, as a way to establish the legitimacy of their unions.

Freed blacks asserted their equality and the legitimacy of their unions by taking marriage vows that included a promise to live together until death. In marked contrast to the situation under slavery, in which slave marriages often ended due to white intervention, African American couples now “solemnly promised to live in love and fidelity to each other until death should part them,” according to one Freedmen’s Bureau employee.

Group wedding ceremonies like the one depicted in the final episode of Mercy Street were quite common. According to one account, one pastor married more than a hundred couples in a single hour!

To acknowledge the importance of the occasion, wherever possible, wedding ceremonies featured special decorations, fine clothing, and plentiful food.

A widely-read periodical, Frank Leslie’s Popular Monthly, included a detailed description of one slave wedding ceremony. Working with limited resources, the celebrants made a concerted effort to create a beautiful environment and to provide a lavish feast:

A large room, used as a laundry, adjoining the kitchen, had been prepared for the festival—dressed with evergreens—the tin candlesticks around the wall polished to extreme brightness, and decorated with sprigs of holly—the floor nicely scrubbed, and benches placed around the walls, which were freshly whitewashed. ... Looking in at the supper-room, there was a temporary table formed of extended boards covered with a white cloth, and well supplied with substantials, such as roast fowls, ham, corned beef, mutton; and, conspicuously rampant, a roast pig, standing on his four feet in a dish full of potatoes, a string of sausages ornamenting his neck, around which they formed a savory chain, and an apple between his teeth.

The wedding party also dressed carefully for the occasion. Brides sometimes wore white dresses and white veils; just as frequently, however, they chose bright colors for the occasion. According to former slave Solomon Northop, red was a perennial favorite for special occasions. “Red—the deep blood red—is decidedly the favorite color among the enslaved damsels of my acquaintance,” he wrote in his memoirs, Twelve Years a Slave.

How I dressed? I’members ‘zactly. I wore a blue worsted skirt, over a red underskirt, over a white linen petticoat wid tuckers at de hem, just a little long, to show good and white ‘long wid de blue of de skirt and the de red of de underskirt. Dese all come up to my waist and was held together by de string dat held my bustle in place. All dis and my corset was hid by de snow white pleated pique bodice, dat drapped gracefully from my shoulders. ‘Round my neck was a string of green jade beads. I wore red stockin’s and my foots was stuck in soft, black, cloth, gaiter shoes. My go-away-hat was ‘stonishment to everybody. It was made out of red plush velvet and trimmed wid white satin ribbons. In de front, a ostrich feather stood up high and two big turkey feathers flanked de sides.

Although most contrabands who attended Civil War weddings did not have access to this sort of finery, they did their best to mark the occasion by donning brightly colored sashes, stockings, ribbons, or kerchiefs to celebrate the occasion. Women also wove wreaths of seasonal flowers to wear in their hair.

Following the ceremony, it was customary for music and dancing to last late into the night. According to Frank Leslie’s:

Until nearly dawn of day the frolic continued. We could hear, when waking in the night, the merry murmur of voices, shouts of laughter, with the sound of shuffling feet, mingled confusedly with the squeak of fiddles and the jingle of triangles, until at last they ceased, and the crowd retired in a state of sheer exhaustion.

For emancipated African Americans, wedding celebrations offered one of the first opportunities to enjoy freedom. Abolitionist author Elizabeth Hyde Botume described one wedding in First Days Among the Contraband. She paid special attention to the couples who—like Belinda and George—finally had the opportunity to make their long-term unions official:

It was touching to see the eager, expectant look on the faces of the old couples. They were aiming for something higher and better, of which they had as yet but a dawning conception—only a glimmer of light.

Anya Jabour, M.A., Ph.D., has been teaching and researching the history of women, families, and children in the nineteenth-century South for more than twenty years. She is Regents Professor of History at the University of Montana, where she is affiliated with Women’s, Gender, and Sexuality Studies and African-American Studies and has received several awards for teaching and research. She is excited to be sharing her love for the Civil War-era South with PBS.
Read Full Bio | Read All Posts