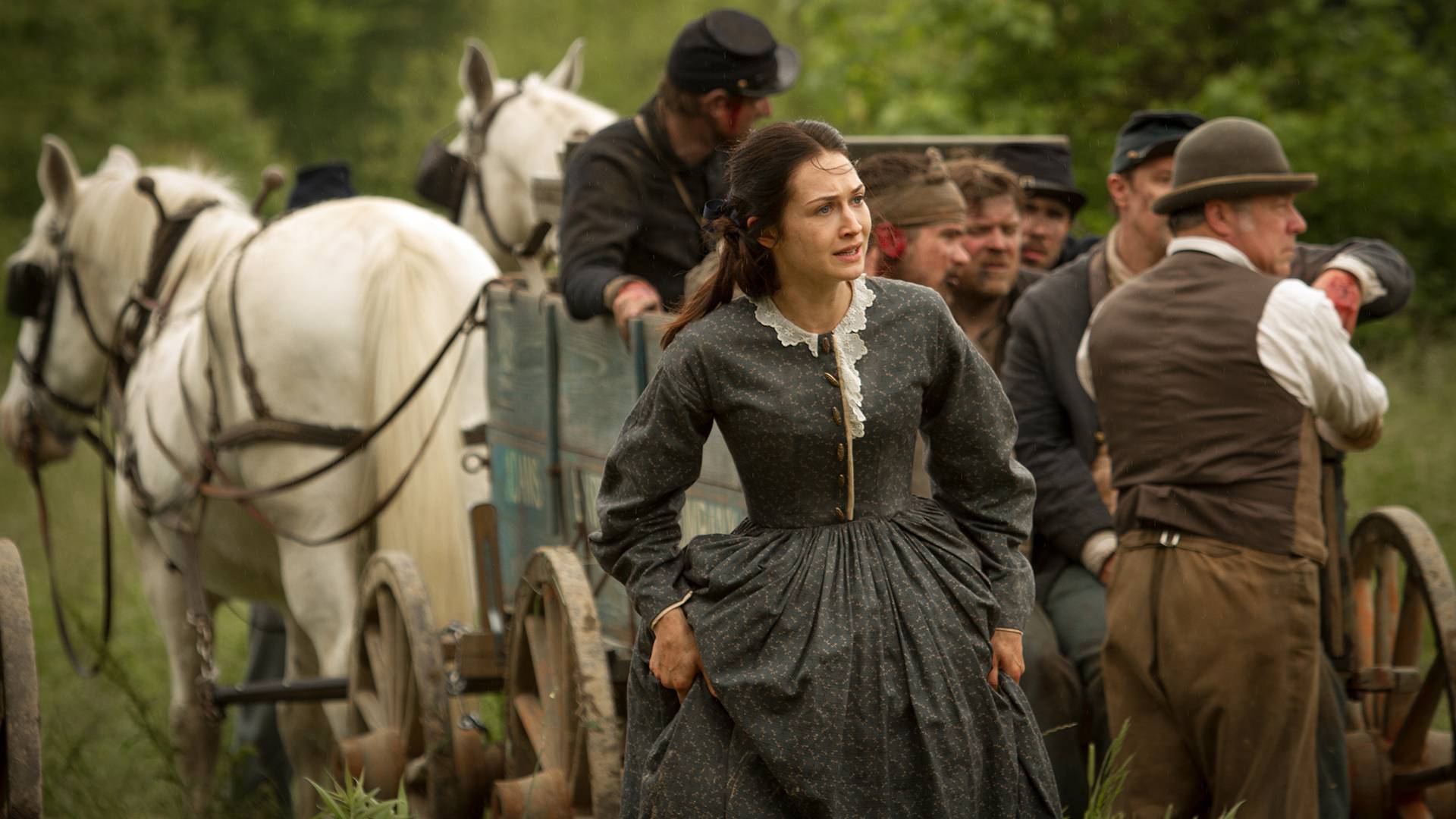 In this blog post, Schultz details the relief work done by clergy and laypeople during the Civil War and the complex subject of nursing the enemy.

As Episode 204 closes, we see Emma Green’s return to Mansion House, where she is tending to wounded Union soldiers whom she and Chaplain Hopkins have just collected from the field. We view Emma through two lenses as her mother, Jane Green, with whom she has been at odds, watches her from across the street. In Episode 203, Jane questions Emma’s loyalty to the Confederacy when a hospital ward erupts over the pro-slavery views of the Greens’ pastor, Reverend Burwell, at the bedside of a dying Confederate soldier. But as she watches her daughter ministering to the evacuated Yankee wounded, Jane Green begins to understand the nature of her daughter’s predicament: Religious and human obligations transcend sectional allegiances. As Emma takes charge, Jane recognizes models of Christian womanhood and sacrifice that she must admire rather than disparage.

Personal and public records documenting relief work during the Civil War reveal a complex world of opinions on the subject of nursing the enemy.  Women on both sides felt compelled to help suffering soldiers in their midst as a central tenet of Christian duty. As Michigan nurse Julia Wheelock put it in 1862 when she passed a group of Confederate wounded in a stable near Belle Plain, Virginia, “I could not pass them by neglected.  Though enemies, they were nevertheless helpless, suffering human beings.” Two years later, she used biblical shorthand: “If thine enemy hunger, feed him.” Union nurses readily note that the U. S. Sanitary and Christian Commissions asked them to treat enemy soldiers as if they were their own. Evangelical New Yorker Mrs. S. K. Brandagee was initially reluctant to nurse POWs, but when she realized that two Confederate men in her midst were ripe for conversion, she changed her mind and concluded, “I know they both loved me, for they cried like children when they bade me good-by.” Charlotte McKay of Massachusetts was so proud of the standard of care offered to all soldiers in Union hospitals that she had heard of southern parents who wanted their imprisoned sons to convalesce in the North rather than in poorly supplied Confederate institutions.

The New England daughter of a cobbler, Amy Morris Bradley, who brought order to hospital ships during the spring 1862 battles on the Virginia peninsula and later whipped into shape the notorious convalescent camp in Alexandria, encountered a double standard with regard to the open-door Union policy. When she attended to the infected wrist wound of a soldier in the 8th Alabama Infantry, William A. Sewall (he was the lone hospitalized Confederate among the three hundred Union men under her care), a surgeon alerted her: “Miss Bradley, are you aware that you are subjecting yourself to severe criticism? . . . . I think you had better not do anything more for him for many are criticizing you very severely and I am afraid it will do you harm.” Firm in her conviction that any fallen man must receive equal care despite his sectional allegiances, she responded, invoking the familiar scriptural adage, “Doctor, I profess to be a Christian, and my bible teaches me if my enemy hunger to feed him – if he is thirsty to give him drink – that poor boy is wounded – suffering intensely – he was my enemy but now he needs my aid; if I obey not the teachings of the Saviour I am not a true disciple. I shall certainly see that he is properly cared for with the rest.” Bradley was willing to brook the disapproval of Union soldiers and staff to carry her point. 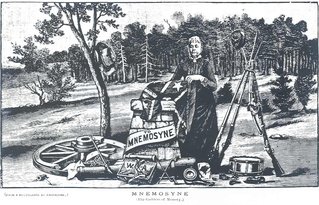 Confederate nurse Fannie Beers with military memorabilia Fannie Beers’ Confederate mem Whether enacted as a broad policy decision or the mandate of an individual chief of staff, surgeons sometimes banned their employees from aiding hospitalized enemies. New York’s Ella Wolcott, stationed at the large pavilion-style hospital at Point Lookout, Maryland, was surprised to learn early in 1865 that “for the first time . . . female nurses were prohibited from entering the Rebel wards.” Having always done so in the past, she “feared that [the surgeon-in-charge] wished to restrict me and that it would not be pleasant for me to remain here.” But when she learned that he had relented, she wrote to Dorothea Dix seeking further guidance and explaining her motives: “It is no sentimental leaning to the rebels which prompts my application and there has been no reproach of indiscretion on my part—but I know that my general work, both in and out of the kitchen can be most faithfully done with a true knowledge of the condition of these as of all the wards.” The woman who challenged protocol was risking not only her reputation for being an obedient worker but also her job.

Sisters of Charity and the Catholic orders that sent nurses to the war theaters did not run afoul of sectional allegiances because they identified themselves as non-partisan. Historians of Catholicism have observed that the good works of nuns like Sister Anthony O’Connell of Cincinnati, who took vows with the nuns of Emmitsburg, Maryland, and worked with both Confederate and Union soldiers at Shiloh, had the power to dispel the anti-Catholic sentiment sweeping the United States at mid-century. Such politically neutral women were “good angels, easing many a troubled spirit and showering love upon all with whom they came in contact.” Though Catholic women were particularly active in border state hospitals in Nashville and Louisville, where soldiers from both armies were more likely to be quartered, evidence also suggests that religious women in anti-slavery strongholds headed to Dixie when their orders sent them. One, Sister Mary Gabriel Kraft of Philadelphia, took care of Rebels in Mobile and Holly Springs, Alabama, having traveled more than 1,100 miles to her destination, while scores of other Philadelphia sisters had only to commute to Satterlee General Hospital, near the intersection of 42nd Street and Baltimore Avenue on the west side of town.

Hospitalized soldiers were in good hands with nuns or laywomen whose pity and piety were awakened in wards where enemies struggled to survive. Inevitably, however, we find testimonials from women who refused to succor enemy soldiers. For such people, sectional loyalties superseded every other consideration, even if they also believed themselves to be pious Christians.  In effect, sectional loyalties became sacralized during the Civil War, wherein the highest demonstration of Christian virtue was manifest in relief workers’ commitment to the State regardless of affiliation. If workers felt coerced to care for enemy soldiers, they were not inclined to generosity and leniency.

By mid-war Mary Phinney herself wrote to a correspondent,

Union nurses at Gettysburg conveyed a similar sentiment: Emily Bliss Souder arrived ten days after the battle and “felt as if I could hardly wait upon the rebels.” Sophronia Bucklin of upstate New York was blunter, attacking Confederate character:  “[They] bore their sufferings with far less fortitude than our brave soldiers who had been taught, in sober, quiet homes in the North, that while consciousness remained, their manliness should suppress every groan.” But not all took such a dim view of enemy affect at Gettysburg: New Jersey’s Elizabeth Tuttle praised the Rebels she tended there as “a great deal better behaved than our men both after they became prisoners and in traveling through Pennsylvania and Maryland on the march with their own army.”

Southern relief workers found that the unpredictability of changing Confederate and Union lines created anxiety for them. If a Rebel soldier had not been evacuated by the Confederate medical service and had fallen into Union lines, he could expect resistance from Northerners. In the case of Winchester, Virginia, which legendarily skittered between Union and Confederate control more than ten times during the war, local women who helped out in the hospitals had to pledge the oath of allegiance when Union surgeons were in charge. Southerners in the western theater were terrified when caring for Rebel soldiers in their homes, which, after 1862, were increasingly situated in Union-occupied territory.  Fannie Beers reported from the Confederacy’s Buckner Hospital in Newnan, Georgia, that Union surgeons were allowed to attend “the few Federals” that lay in the wards, even though “our [surgeons] always responded readily, if needed.” As Union nurses cast aspersions on Rebel soldiers, so too did Confederate nurses defame the character of Union surgeons, complaining of their “indifferen[ce] to the comfort of their patients,” their avoidance of “all unnecessary trouble,” and their extravagant use of precious and dwindling pharmaceuticals.  When asked by the redoubtably named Dr. Gore to attend to severely wounded Yankees, Beers quailed: “They had not only murdered my poor boy Willie, but dozens of dearer friends. They were even now running riot in the home I loved. They were invaders! I could not meet them, could not nurse them. It is painful thus to reveal the thoughts of my wicked, unchristian heart.” Beers finally came around when reminded that these Yankees were “God’s creatures and helpless prisoners”—a sign that initially intractable nurses could experience a change of heart toward those whom they held responsible for the havoc wrought on their own soldiers.

In its most primal manifestations, refusal to offer aid to enemy soldiers was personal: Those who were inconsolable about the loss of friends and family could exact a material penalty by ignoring or altogether refusing to minister to men from the other side. They could rationalize that prisoners were depleting supplies that should go to their own men. Amid the fierce fighting in the eastern theater during the summer months of 1864, Ohio’s Matilda Morris saw suffering she considered “a thousand times” worse than what she had witnessed earlier from her post at Armory Square Hospital in Washington. When told to take care of Rebel soldiers as if they were Union men, she confessed, “Deep in my heart I could not feel the same.” The range of reactions we see regarding the sectional loyalties of female relief workers were directly the result of the specific military and medical contexts in which they labored. If workers were overwhelmed with the care of men from their side —a common occurrence after battles when casualties mounted quickly into the thousands—it was all too easy to turn a deaf ear to enemies or benignly neglect them. What is more surprising, however, is that despite occasional lapses in professional conduct among relief workers with strong sectional proclivities, most ultimately expressed the feeling that a fallen man was no longer an enemy; that his exigency was a kind of equalizer—regardless of whether he wore blue or butternut. 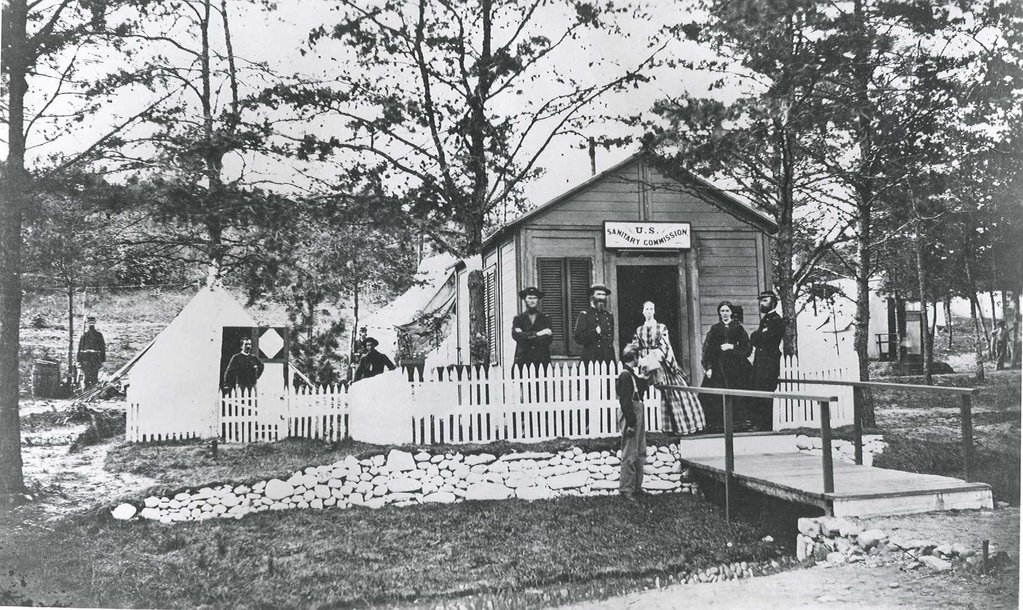 *Inset photo: Confederate nurse Fannie Beers with military memorabilia. Memories was her homage to the goddess of memory, Mnemosyne, and the Lost Cause. From Fannie Beers’ Confederate memoir, Memories (1888)