Samuel and Charlotte in a scene from episode 5.

Kenyatta D. Berry is genealogist and lawyer with more than 15 years of experience in genealogical research and writing. She began her genealogical journey while in law school and studying at the State Library of Michigan in Lansing. A native of Detroit, Berry graduated from Bates Academy, Cass Technical High School, Michigan State University and Thomas M. Cooley Law School. She also co-hosts Genealogy Roadshow on PBS.

In this blog post, Berry discusses slave resistance in the Colonies and Caribbean, and how education and resistance later went hand-in-hand.​

Episode 205: In this episode, Major Clayton McBurney III, the eccentric head of the hospital, has closed the contraband school.  While discussing the school closing, Charlotte tells Samuel that she might have mentioned something about a slave rebellion in Haiti. Samuel is not surprised by Major McBurney’s actions, which leads to a tense exchange with Charlotte. Later in the episode when Samuel’s medical skills and future are discussed with Major McBurney, he convinces the Major to reopen the contraband school to Charlotte’s surprise.

Slave Resistance in the Colonies and Caribbean

The Haitian Revolution was an anti-slavery rebellion that took place from 1791 to 1804 on the French colony of Saint-Dominque. The ratio of blacks to whites influenced the frequency of revolts and their success. At the time of the Haitian Revolution, there were 30,000 whites, 24,000 free blacks, and 452,000 slaves. Other major factors in slave revolts included cruelty, harsh living conditions and the philosophical impact of the French, Haitian and American Revolutions.1 During periods of economic depression living conditions worsened, food became scarce and owners sold slaves to pay debts resulting in the breakup of families.

The economic conditions of 1730s lead to several plots, culminating in the 1739 Stono, South Carolina, rebellion.2 With the news of the war between England and Spain, enslaved people heard that Spanish Florida would offer liberty to Carolinian slaves who could escape to the South. During the Stono Rebellion, about 20 enslaved people broke into a store by the Stono River, seized arms and killed two white storekeepers. As the enslaved people moved southward, burning plantations, killing whites, the group’s size grew to 60. After the rebellion, 30 slaves were rewarded for protecting their masters and fighting and killing some of the insurgents. In 1740, as a response to the rebellion, South Carolina adopted a new slave code and temporarily scaled back the importation of slaves from Africa.3

Slave revolts played a major role in the outlawing of the African Slave Trade and limiting the spread of slavery to new territories.  James E. Oglethorpe the founder of Georgia went as far to outlaw slavery in Georgia. The ban on slavery reduced the workforce and strained Georgia’s economy. By the mid-1740’s Oglethorpe left Georgia and there was nothing to prevent Georgia settlers from importing slaves. The House of Commons adopted the recommended legislation that would permit slavery in Georgia in January 1751.4

Nat Turner was a deeply religious man who learned to read and write at a young age. He had frequent visions he believed were signs from God.  In 1831, Nat Turner led a slave rebellion in Southampton, Virginia killing sixty men, women and children. The hysteria after the rebellion lead to the execution of an estimated 200 slaves and free people of color. In the aftermath, Black codes all but eliminated slave schools, slave religious meetings and slave preachers.5 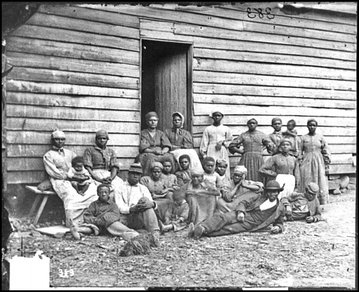 Cumberland Landing, Va. Group of "Contrabands" at Foller's HouseLibrary of Congress [7] Education was always a priority for slaves and free people of color. In African American Education in Slavery and Freedom, Heather A. Williams presents evidence of African Americans long struggle for education. “During the transition from slavery to freedom, many African Americans simultaneously attempted to satisfy material needs with intellectual longing.” 6.

Mary Smith Kelsey was a free woman born to an Englishman and free black woman in Norfolk, Virginia, around 1823. When she was about six years old, Mary was sent to Alexandria, Virginia, to be educated. She stayed for about 10 years, and in 1851, married Thomas Peake. By September 1861, she had organized a school for contrabands. The American Missionary Association paid some of her salary and supported her as its first black teacher.8

“To her God has thus allotted the privilege of opening the first reading and writing school among this ‘peculiar people.’”

Like Mary S. Peake, Charlotte Jenkins understood the need for contraband schools during the Civil War. As part of her ongoing contribution as a strong leader at the contraband camp Charlotte is enabling the former enslaved people to move on to a new life of freedom. Empowering them with the knowledge necessary to take care of themselves but also remember those who fought for their freedom through resistance in slave revolts.

[7] The Stono Rebellion | Library of Congress

Kenyatta D. Berry is genealogist and lawyer with more than 15 years of experience in genealogical research and writing. She began her genealogical journey while in law school and studying at the State Library of Michigan in Lansing. A native of Detroit, Berry graduated from Bates Academy, Cass Technical High School, Michigan State University and Thomas M. Cooley Law School. She also co-hosts Genealogy Roadshow on PBS