A Behind-the-Scenes Look at the Making of Season 2

Last Updated by Ashlee Smith and Clarence Chamberlain on 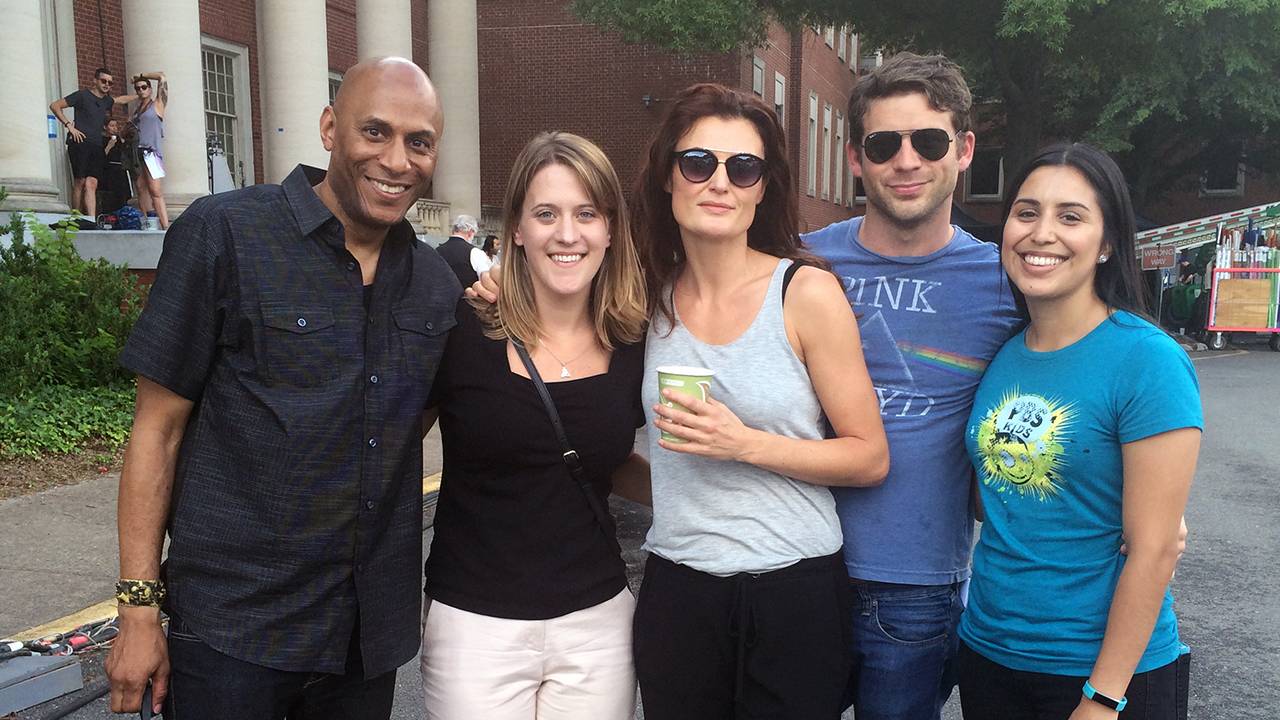 Editor's Note: We continue Mercy Street Revealed's blog posts with a behind-the-scenes look at the making of Season 2. Clarence Chamberlain and Ashlee Smith, PBS staff members, won a prize to visit the set. In this post, Clarence and Ashlee share their experiences. Clarence and Ashlee are in the dark shirts in the above photo.

Get an inside look at Season 2!

I have loved Mercy Street since the first day I heard about it. I watched every episode, attended a Q&A session with some of the cast and crew, and collected everything I could find on it – including a story from my home town newspaper on how our Civil War Museum of Medicine had participated in the historical research process. I even roped every member of my family into watching the first episode – after which they were all hooked. Two things always stood out to me about this production, one being that I’ve never heard a Civil War hospital story, and two being the project’s dedication to historical accuracy.  When I won the raffle to visit the set of Mercy Street, I was aware of the historical accuracy yet I didn’t expect the extent of what I experienced.

Walking into the set of Mansion House was like stepping into a time machine. The door opened and inside it was a whole different year.  From the murky, seemingly dust filled air to the group of union soldiers on my left (some with amputated limbs, some with bloody bandages) to the hustling nurses and hospital beds on my right – I was transported years into the past. All of a sudden the space was filled with assistant directors, producers, stand-ins, make-up artists and an array of others and I realized how much work goes in to making a production that comes alive not just on screen, but also in person.

My trip to the set was an eye-opening, fascinating experience. We had the opportunity to chat with the costume designer, Amy Andrews Harrell, who impressed us with the sheer volume of costumes that need to be made for this show.  She has located fabrics straight out of the 1800s and recreated others, creating stunningly beautiful ball gowns.  We were also able to talk to the special effects make-up artist who filled us in on the gory details of portraying diseases and wounds on film. We even got the chance to see the famed amputated leg from season one! We even spoke with Kelly Farrah, a prop master general who has certainly worked on his fair share of Civil War productions, which he told me are his specialty. We watched as he showed us a peg leg that he was crafting to fit the bill historical accuracy.

The best part of the experience was watching the general camaraderie of the cast and crew.  Lyne Renée (joining the cast in Season 2 to play Lisette) filled us in on what a great experience it has been for her with this cast. Everyone, from star to extra, could gather around the coffee and snacks to chat (union or confederate!). I couldn’t have asked for a more incredible day and I can’t wait to see the amazing things that Mercy Street Season 2 will bring.

It’s not every day that one gets the chance to visit the set of a television series. That was my initial thought when a coworker texted me the surprising, exciting news that I had won a visit to the set of Mercy Street. Yes, my name was drawn along with two other lucky winners during a PBS all staff meeting. What a rush I felt when the reality hit me that I was going behind the scenes of a PBS series. Seemingly silly little thoughts started dancing between the top of my shiny, bald head and my two dreamy eyes. What if when I arrive on set, they ask me to do some extra work? What if they ask me to do an actual scene? Ah … Clarence this could be your big break. Some of my coworkers suggest my showing up on set in period clothing.

Our visit is set for a glorious afternoon. It is a bright sunny day and the 90-minute drive [from PBS HQ] is a piece of cake with little traffic due to the 2:00pm meeting time. In the morning, the other two winners and I received a production call sheet for the day. This is really Kool stuff. In essence, you get the feeling that you’re actually a member of the crew. The call sheet consists of a rundown of the shooting schedule for that day. What time does the day starts and end? What scenes are being shot along with the actor’s name and character? What time is lunch? You get the drill.

The term “hurry up and wait” is a saying probably originating in the United States military sometime in the 1940’s. Oh boy, we sure did learned quick, fast and not so much in a hurry that the term certainly applies in the film making process as well. You see extras waiting outside for their particular scene. Actors are waiting inside Mansion House for their scene. The only time I didn’t notice hurry up and wait was during lunch break. The actors came in the cafeteria in costume. We notice a gentlemen with his head wrapped in a band aide with a patch of blood covering one eye. That’s gotta hurt. I notice gentlemen with one arm. Our set visit tour guide, Jen, informs us that there are three amputees in the cast as extras. So when you’re watching Mercy Street, it’s not all special effects. It’s also good to know that Mercy Street is employing folks with special needs. All the actors jubilantly sat on one side of the cafeteria while the crew sat on the other. How do they keep from dropping food on their costumes while grubbing down? Jen introduces us to the head of casting for extras Chad Darnell. I wonder if this is a good time to mention I starred in a High School production of West Side Story as Bernado? After lunch, we notice a gelato ice cream food truck parked out front. It’s really amusing to see people dressed in 19th century clothing waiting in line for their favorite flavor of ice cream. How the heck these actors maintain their perfect physiques with all these treats is beyond me?  We all partake in the eating of a delicious ice cream treat on a hot day in Richmond. I have a scrumptious strawberry ice cream cone--yummy! 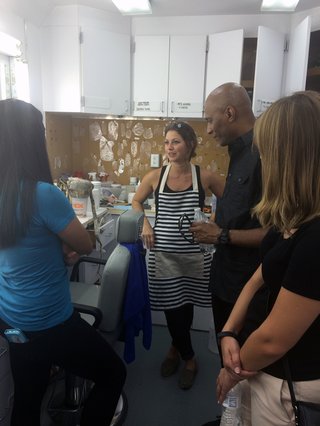 Visiting with the makeup and special effects department Finally, we’re entering Mansion House where the indoor scenes are being shot! Jen instructs us to totally cut off our phones upon entering. The first thing I notice is the very same view that Nurse Mary Phinney (played by actress Mary Elizabeth Winstead) experienced upon walking into the Mansion House Hospital for her first time. It was surreal. We see actors in costume and crew members bustling in the main hall. They are also propped on the stairway getting ready for the next scene! We tip toe through the front entrance not wanting to be seen or heard as the company gets ready to shoot. A sharp right turn finds us in a 19th century hospital ward. There are about eight beds surrounded by sky blue wall paper with a paisley like design fitting for the time. One of the bed’s sheets is tattered and dirty with some blotches of blood. The blankets are thin, olive green standard military in appearance. There is also a wooden table with different sorts of herbs in glass jars that could be used today for packaging honey. There’s a crew member lying on a ward bed wearing jeans and a PBS t-shirt reading a book. We later find out he is a stand-in for the shoot. Crew members’ standard gear is comfortable tennis shoes, shorts, jeans and a casual shirt. The Mansion House smells like a warehouse and before the scene a fog or mist machine spews out some misty, fog like effect for I guess tone or style. Jen suggests a picture. We pose like giddy high school geeks at prom night on one of the hospital beds. Suddenly we hear someone shout “quiet on the set”!

Each command seemed to be repeated sharply and loudly. However, at the same time the commands were given with a certain cadence that seemed routine from the ADs (assistant directors).

I check my phone to make sure it’s completely off as we once again tip toe to get a closer look.

Someone comes out with a slate and claps it.

The scene is shot until the director is happy with the actors’ performance. Oh snap! Is that one of the former stars of ER, Laura Innes, directing a scene? Jen nods gleefully yes.

Crew members and actors hustle on to the next scene. Three actors who were obvious patients of the hospital begin to rehears a scene in another ward. Each fashioned a bandage or arm sling with some blood showing. Another actor with white hair and beard sits solemnly quiet in a chair wearing a union uniform. Crew members start moving cameras, dollies and other props. Makeup assistants are touching up actors. Extras are coming in and going out of Mansion House. The previously mentioned stand-in positions his body in front of the camera for technical purposes such as lighting and camera set up for the next scene. Two crew members start readjusting the height of stands for lights. And the entire thing starts over again. Hurry up and wait. Ah… the magic of making good TV.

Kudos to everyone who made the visit to the Mercy Street set enjoyable. Everybody from the crew, actors, producers to writers were extra friendly. Special thanks go out to the head of the wardrobe department, costume designer Ms. Amy Andrews Harrell. Amy showed us some choice dresses and designs from Mercy Street. The hallway of all the costumes was long and wide which was matched by Amy’s patience and friendliness. Amy sure did have a healthy knowledge of the history of 19th century fashion. Thanks to new cast member Lyne Renée who plays Lisette Beaufort. Thanks also to Lindsay Farris who plays Declan Brannon. Lyne and Lindsay were very friendly even though they couldn’t share much about their new up and coming roles for Season 2. Thanks to writer Jason Richman for taking the time to say hello between scenes. Last but not least, a mountain of thanks to Jen who was our tour guide, photographer, liaison to the stars, head cook and bottle washer. Jen walked through the many rooms in Mansion House where particular scenes are shot. Jen was also patient with all our questions even though it was obvious that she still had business to deal with on set. After learning how the entire production comes together, I simply can’t wait to watch the next season of Mercy Street on PBS. 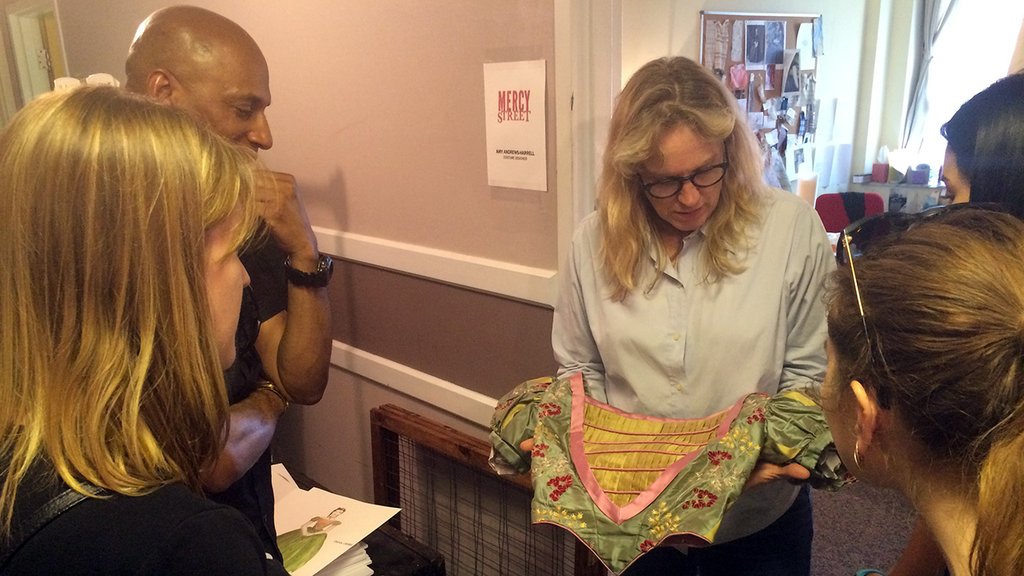