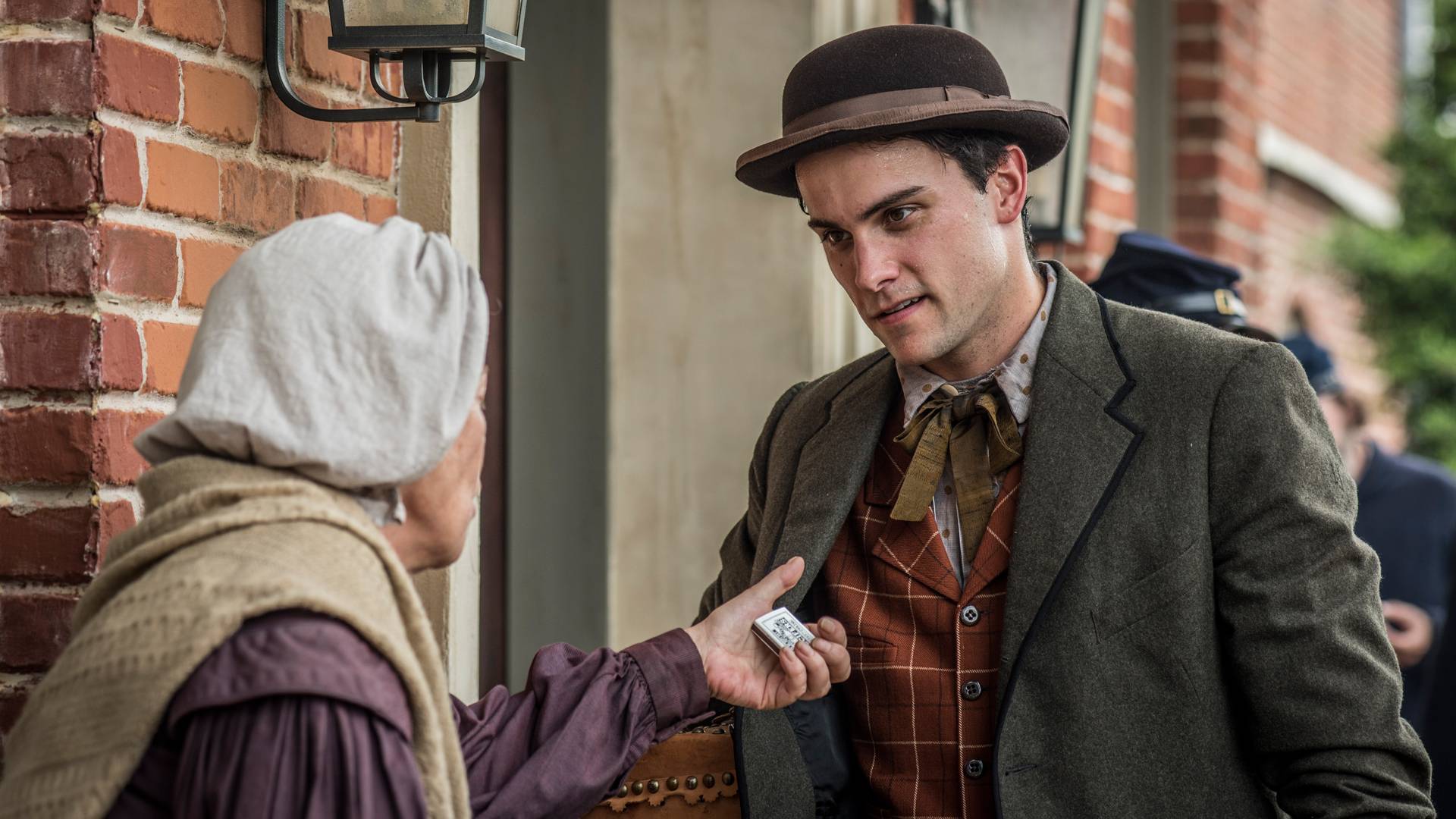 In this blog post, Schultz explores how characters across the series try on new roles and experiences as several plot lines thicken.​

As the several plots of Mercy Street thicken, we find characters who try on new things. Dr. Foster performs his first amputation—on his brother Ezra’s foreleg no less—and literally tries on his captain’s uniform to find out whether the image staring back at him is that of a bona fide army surgeon. Confederate officer Frank Stringfellow enters Mansion House to gain military intelligence, posing as Billy Griffin, the dentist, only to realize that he will need to perform as a dentist, extracting Matron Brannan’s molar. And with encouragement from Aurelia Johnson and Samuel Diggs, who have themselves tried on new things, the teen-aged Miles, Foster family slave, seizes the chance to flee his bondage, choosing the uncertainty of life as a contraband over his well-dressed role as Mrs. Foster’s pet. Even Anne Hastings goes “under cover,” making eyes at Jed Foster and communicating allegiance to Nurse Phinney for a more nefarious purpose.

Trying on new things leads to personal liberation in some cases and to a longer path to liberation, as in the case of Tom Fairfax, who, with Chaplain Hopkins’ counsel, begins to confront his post-traumatic battle stress. Trying on new things also led to advances in medical knowledge. Though well-versed in civilian medicine, Dr. Foster has never amputated a limb and reads the textbook instructions with the procedure in progress. The old medical adage of “see one, do one, teach one” is compressed into one event instead of three. Nurse Phinney and Emma Green assist—certainly a new experience for both of them—and Emma thanks Mary for making her witness the grisly surgery because it has given her the measure of her mettle. All of the surgeons who became proficient in performing amputations (and this was by no means the majority of the 12,000 surgeons who ultimately were hired by the Union Army) had to do a first one. Most of them would have witnessed and assisted at procedures before taking knives and saws into their own hands. Dr. Foster’s lack of experience in this quarter is unusual but not unheard of. Regimental surgeons in the field, used to caring for men with dysentery and typhoid, were called upon in extenuating circumstances to perform amputations and other surgeries when trained Army surgeons were scarce.

Women’s attendance at amputations was even more unlikely. Personal accounts, including that of Mary Phinney von Olnhausen, reveal several examples of experienced female nurses assisting surgeons. Phinney mentions in her diary the number of men at Mansion House who underwent amputation, but says little about her role in the procedure. Mary “Mother” Newcomb of Illinois amputated a soldier’s finger after a battle when surgeons were in short supply.  Catherine Lawrence of Massachusetts was given the job of ligating an artery after one such procedure. Most who observed amputations were not as frank as Amanda Akin Stearns of New York who confessed, “I remained until they were tying the arteries, when finding my limbs losing strength, and w/ sickness and trembling coming over me, I thought it prudent to leave.” Stearns’ words provide context for Emma Green’s skittishness as Ezra Foster goes under the knife.

One of the most extraordinary descriptions of an amputation by an army nurse comes from Maine’s Amy Morris Bradley—extraordinary both because of the speed of the surgery and because of the soldier’s post-operative discovery. From City Point, Virginia, in 1864, home of the Union Army’s most substantial hospital installation, Bradley wrote,

Our Surgeon performed several amputations which I witnessed, one in particular I shall not soon forget. The subject was a lad of some 19 years – a delicate looking boy, who had been shot in the upper part of the right arm near the shoulder. He . . . could not bear the thought of losing the arm. . . . Dr. McRuer said he must examine the wound, he talked with the little fellow, and finally got his consent to be put under the influence of chloroform, tho’ not with the intention of amputating the arm. . . . – the bone near the shoulder joint was badly fractured and mortification was commencing. The arm must come off or he could not live long. But the little fellow had not expected that – Should we arouse him and tell him, or should it be done at once – as it would have to be done anyhow? – All said do it now, it will be better for the lad in the end – A few minutes and the shoulder joint had been unlocked – the arm taken off – the skin neatly closed over the bone – Every sign of blood removed and our hero (all unconscious of the operation) restored to consciousness again.  I wish you could have heard our noble Surgeon as he prepared him for the loss of that good right arm.  He told him that he had examined it and found the bone sadly fractured – he explained the necessity for amputation – that he must die if it was not done – talking so gently . . . till at last he said, ‘Yes, you may take [it] off!’ The doctor asked him if it pained him as badly and began to call his attention to the arm. . . . The effect for a moment was most distressing – he turned as pale as if he were dead – We thought for an instant he would die. But the soothing words and voice of the doctor brought the color again to his lips, and the brightness to his Eyes.

Surgeons who routinely amputated arms and legs saw it as an evil necessity; some even expressed their fascination and thrill in enacting such a radical alteration of the body. Dr. Foster, undoubtedly like other physicians, could scarcely bear the knowledge that he had permanently maimed his own brother. Before attempting the surgery, we see him dosing himself with morphine. Afterward he lets loose with alcohol and additional morphine, whereupon Nurse Phinney discovers him and offers her help in breaking his addiction.  Although it was again uncommon, government documents allude to instances of surgeons becoming drug addicts—whether because, like Foster, they were curious about the effects of barbiturates on human bodies and used themselves as clinical subjects; or they simply needed to dull the psychological pain of the misery that surrounded them. Foster risks being dismissed from the service, even as he has just entered it officially, by confessing his addiction to Mary. In acquiescing to the moment and accepting her help, Foster, too, tries on something new—but something that will take courage, suffering, and time to achieve.