Until Death or Distance: Romance and Marriage Among Contrabands

Posted by Audrey Davis on

In this blog post, Davis discusses the customs and challenges of marriage during slavery.​

Until Death or Distance: Romance and Marriage Among Contrabands

The heart of a contract consists of agreement and consent rather than force or coercion, at least in theory…. When former slaves married, they entered legal contracts…that had been off-limits to them in slavery.[1]

It seems less degrading to give one’s self, than to submit to compulsion. There is something akin to freedom in having a lover who has no control over you, except that which he gains by kindness and attachment.[2]

Harriet Jacobs relating her decision to defy her owner by having a relationship with someone she chose.

With the conclusion of Season 2, Mercy Street’s African American characters have a renewed appreciation of family and the opportunity to live without fear of separation. Charlotte’s school has reopened, and at the request of the contrabands, she helps them achieve the dream of legal marriage. Sam visits his first plantation, where he witnesses the slaves’ heartbreaking struggle to keep their families together. Belinda marries her true love after hiding the relationship for over twenty years. 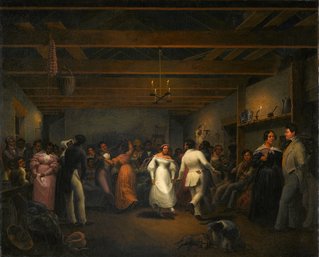 Kitchen ball at White Sulphur Springs.Schomburg Center Two of Charlotte’s contraband students approach her about getting legally married, so their children would be secure in the knowledge that no one could separate their parents. The enslaved could only marry with permission from their owners, but even without approval, they formed lasting relationships. Regardless of the owner’s consent, slave marriages were not legal, so they lacked the protection of other unions. Families also ran the risk of being separated at their owners’ whim. Because of this precarious situation, slave marriage vows often promised “until death or distance.”

Sam’s visit to the Fosters’ plantation opens his eyes to the trials of enslaved families. After he uses his medical skills to save an enslaved woman, Julia from a difficult childbirth, he is confronted by Mrs. Foster’s callous plan to sell the baby, who is revealed to be her own grandchild. Mrs. Foster hopes to again conceal the proof that her younger son Ezra has been sexually abusing female slaves. Sam helps purchase Julia and her baby from Mrs. Foster to keep them together, ultimately bringing the family to Alexandria.

Julia’s experience is not uncommon. A horrible consequence of slavery, especially (but not exclusively) for women, was sexual molestation by their owner or others in proximity with power. Evidence of this practice was seen the birth of lighter skinned slaves and the creation of the one-drop rule of racial classification which made one a slave if it could be proven that they had one drop of black blood.

I was born in Churchland, Virginia, December 21, 1856. My mother was a slave, and my father—well, the fact is so evident you can’ dodge it. It’s their stamp an’ not ours; therefore I don’t blush when I tell you this part of the story … I was born a white baby wid a slave mother.[3]

There were some instances of the enslaved taking control of their own lives. Sometimes they fled, committed suicide, or in the extreme, killed their rapist, which brought certain death to the victim if they were caught. Famed abolitionist and author Harriet Jacobs fought against pressure from her master to sleep with him by having an affair with a white lawyer in her community and having two children with him. She wanted control over her life and told her master that slaves had the right to decide who they loved.

Don’t you suppose, sir, that a slave can have some preference about marrying? Do you suppose that all men are alike to her?[4]

This only infuriated him. It resulted in her hiding in a garret for seven years on his property to protect her children until they could all escape safely.

Another hardship of being enslaved was forced marriage. Sam meets Dr. Foster’s childhood friend, Saga, who ruefully comments that Mrs. Foster “found [him] a good wife.” Such unions were commonly arranged by slave owners for their own advantage and to increase the owner’s property through the birth of children. It is clear from the interaction that Saga is not happy with the arrangement. By contrast, “fortunate” slaves had masters who allowed them to marry and live with the person of their own choosing.

Sometimes, against all obstacles, slaves found love and happiness. During Season 1 of Mercy Street, Belinda, while having the protection and stability of rich owners, has been denied her own life. In Season 2, we find out just how much of a sacrifice she and her friend George have made to have a relationship. After falling in love they were denied the right to marry as they were owned by different families 10 miles apart. George’s owner would not grant permission for the marriage, as any children from this union would belong to the Green family. This was a common occurrence. If the permission was granted by the two families these types of marriages were called “abroad or broad marriages.” With freedom, Belinda and George now have the right to marry. They get married with several other couples in a small but happy celebration. 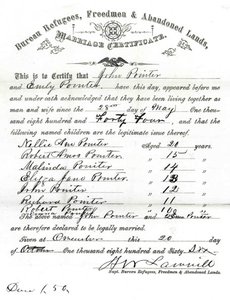 John and Emily Pointer Marriage Certificate African American marriage ceremonies varied widely. The custom of “jumping the broom” is well-known, but it was not an element of all weddings. Some ceremonies had other Africanisms, whereas others might be a more “traditional” Christian weddings. Whether there was a member of the clergy present depended on the owners. Weddings commonly included special food, alcohol, music, and dancing. The couple would wear their finest clothing, and sometimes rings were exchanged. Depending on the owner and their economic circumstances, slaves might get time off or a gift of food or clothing for the ceremony. Contraband weddings were similar, but with the added benefit that they were legal.

With the conclusion of Season 2, the African American characters get their first foothold into wider society by having legally recognized marriages. This is only the first step on a long journey to full citizenship, but the characters of Mercy Street are happy to celebrate small victories as they occur.